I share a lot… and that’s not always easy. But, it’s part of my growth, and a part of ability to help others.

And here I’m going to share a few ‘get to know you’ facts that you probably don’t know about me (this is a wee bit easier!)

1. I rode my bike across Canada. Yep, from Tofino, BC to St. John’s Newfoundland. I 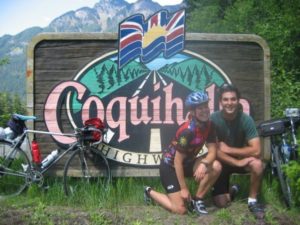 did it in 2004 after graduating from the University of Victoria. The 2 guys I went with… I met them for the first time 3 days before we departed (don’t tell my mom). Awkward? Only for the first few days.

2. I was valedictorian of my high school. I also kinda cleaned up the awards and scholarships. When I was 17, I felt a bit embarrassed about my smarts. I didn’t want to appear ‘too smart’.  Now I think ‘damn, girl, OWN THAT!’

3. Though somehow I became a relatively decent runner (call it persistence!), I didn’t start that way. In grade 3 cross-country I came 105 out of 120 runners. I idd finish though!

4. I am married to the most amazing man. We’ve been quite transparent in the ups and downs in our relationship, and are stronger together because of the challenges. 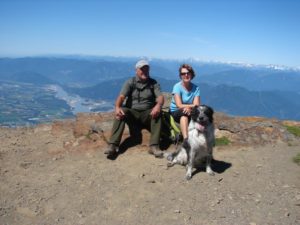 5. Our puppy, Brodie, made me cry in puppy kindergarten when I was 14. He wouldn’t stop biting me! He did turn out to be the best dog ever (ok, maybe I’m biased). That’s Brodie on the left, with my super active, awesome mom and dad.

6. I tried going off coffee. I lasted 3 miserable days. Coffee is a good friend of mine- and I’m good with that. Now I stick to two cups in the morning (or one over-sized mug). I also love a good Americano.

7. I had the lead role in my grade 7 Christmas play, which included 2 solos (you’d understand why this wasn’t a good thing if you heard me sing). I played Father Time, and kept that nickname for the rest of the year. Sigh. I really didn’t want to be a boy. 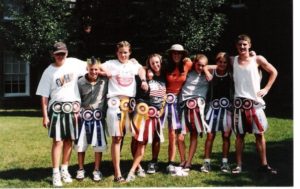 8. I started my ‘athletic career’ with horseback riding at the age of 10. I joined Pony Club, and got into Tetrathlon (swimming, running, shooting and pistol shooting).  Add in fencing and you get Modern Pentathlon.  I spent my high school years training, and the summers competing across Canada and the US.  I even got to go to the England, Ireland and Scotland after grade 12. I won the Canada Winter Games in pistol shooting in 1999. I also had platinum blonde hair at the time (cut super short).

9. I’m not big on TV: it’s a great way for me to fall asleep. But, I really, really enjoyed Mad Men. I also dig a good romantic comedy (and I may even stay awake for that one). And if you have great suggestions for Netflix- keep me posted! 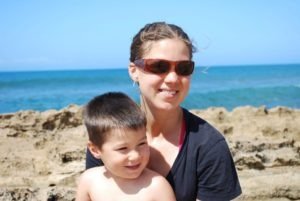 10. I love routine and tradition. I’m super happy going back to the same spot over and over again for vacations. Like Seattle. Keith and I go to Seattle each winter for a weekend away (just the two of us). We also LOVE Hawaii (though we’ve explored the different islands). 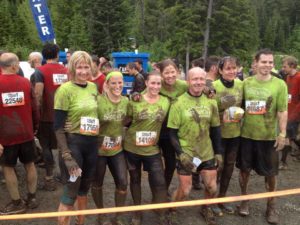 vowed it would be the last time EVER because I was so darn cold. Whistler in June…. With that being said, I love hot baths, fuzzy mittens, and thick socks. One day I’d like to have a home down south so I can escape the winters.  But for now, there’s nowhere else I’d rather live. I LOVE British Columbia!

So now you have a more complete picture of who I am.  What did you think?

Uncover Your Weight Loss Roadblock: Take this 2 Minute Quiz to Get Your Personalized 3 Step Plan to Break Through What’s Keeping You Stuck

Discover the diet rules ACTUALLY worth following to end the fight against yourself and food so that you can get to your happy, healthy weight, naturally, permanently and WITHOUT dieting.